Planning a new kitchen? Find out the best design solutions to suit you and your lifestyle

For our London couple, while the space they had committed to their kitchen was large, this did not leave them much room to play with for the rest of the footprint, so they needed the room to be multi-functional, something that many of us can relate to. In this case, it meant the large open plan room had to host capabilities of cooking, entertaining, relaxing and working, but still keep some separation between the areas, to stop work flooding over into the rest of life.

Our clients in this case were very clued up on what they wanted for the space, and were really investing a lot of time and money – so needed it to be exactly right. The kitchen they had before they came to us had a lot of functional problems so they had a very clear idea of what they didn’t want – no pressure!

Before we were involved in the project, they solved all foreseeable architectural problems, so the room was one big rectangle. While a room with straight walls and simple dimensions might seem like a designer’s dream, it poses its own challenges in that there are so many more possibilities, so perspective is important. That being said, our clients had an excellent idea of what they needed in the room, so the final design was highly curated and led by them. Particularly important to get right were the parallel bar and office areas, which ended up being perhaps the most memorable elements of the kitchen. 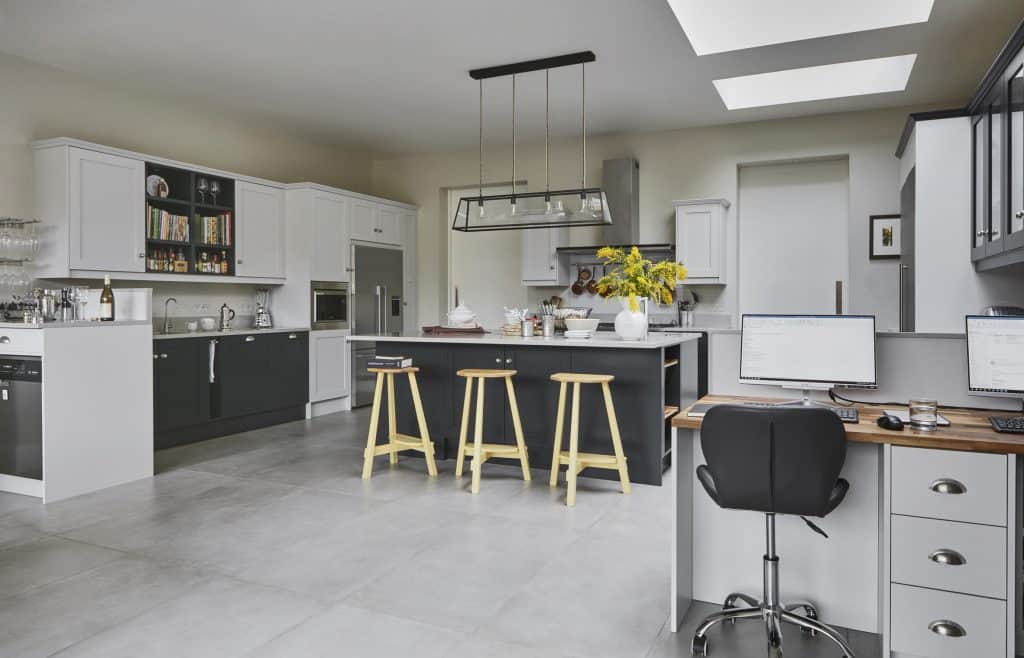 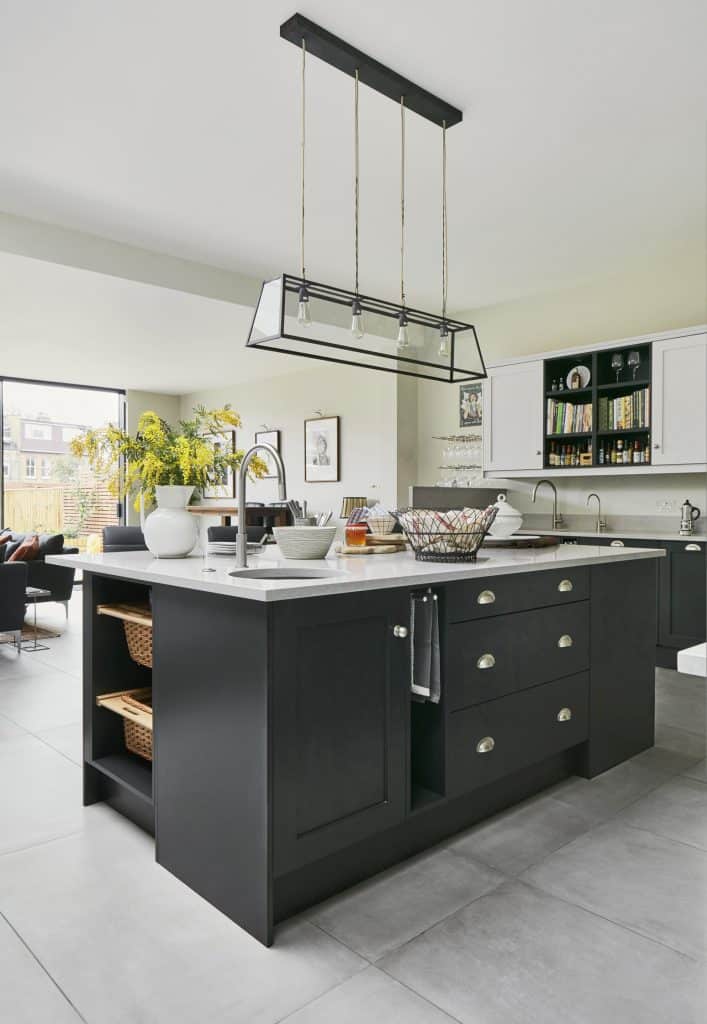 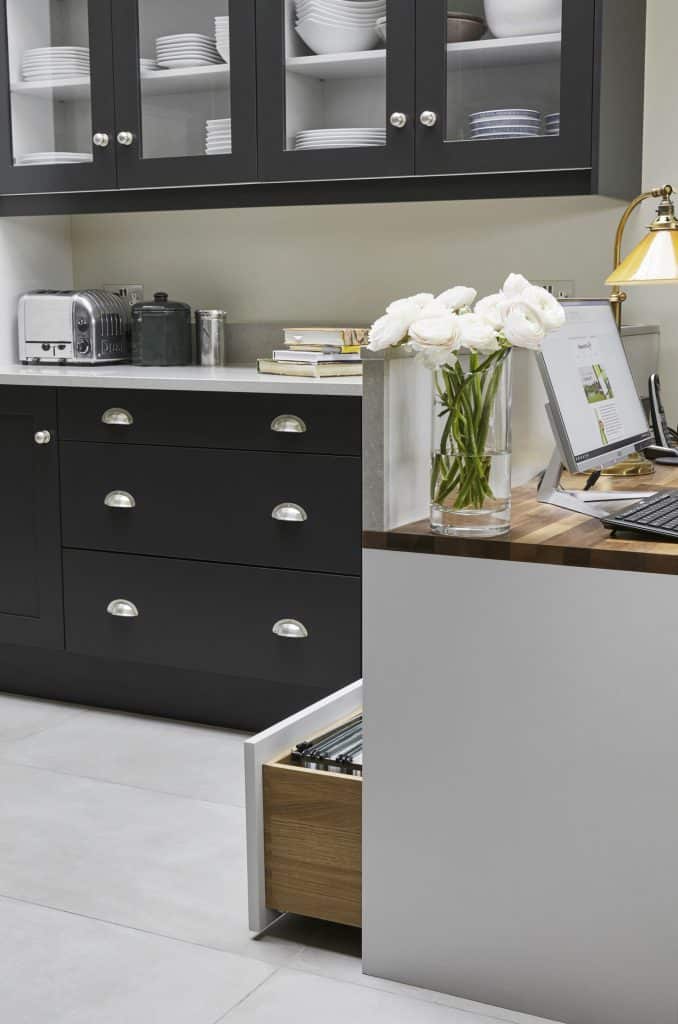 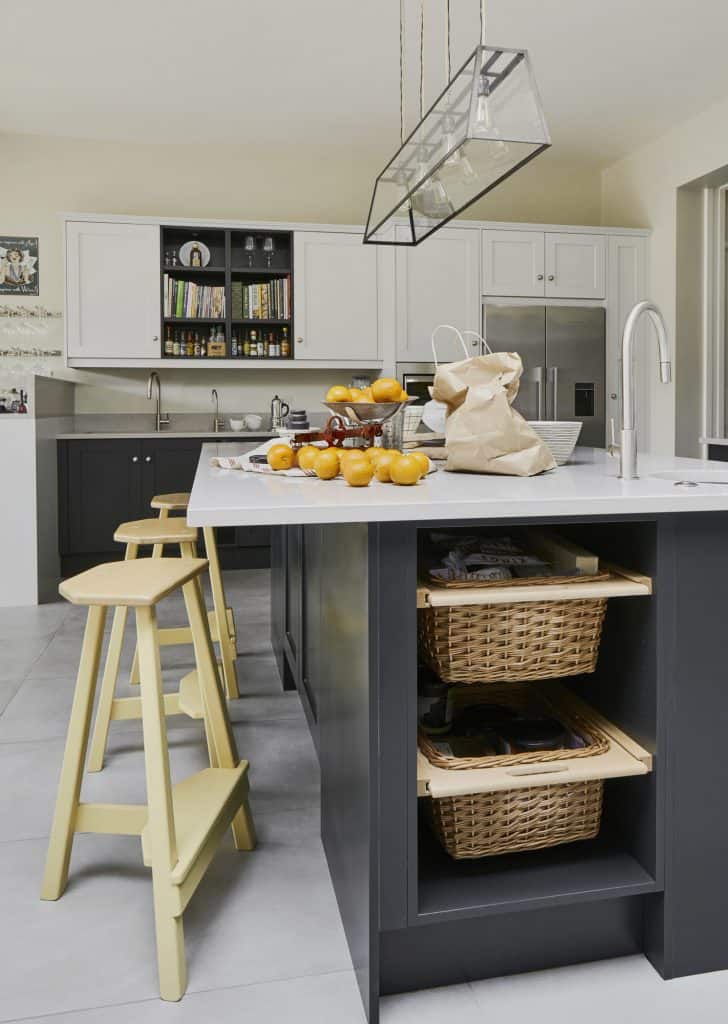 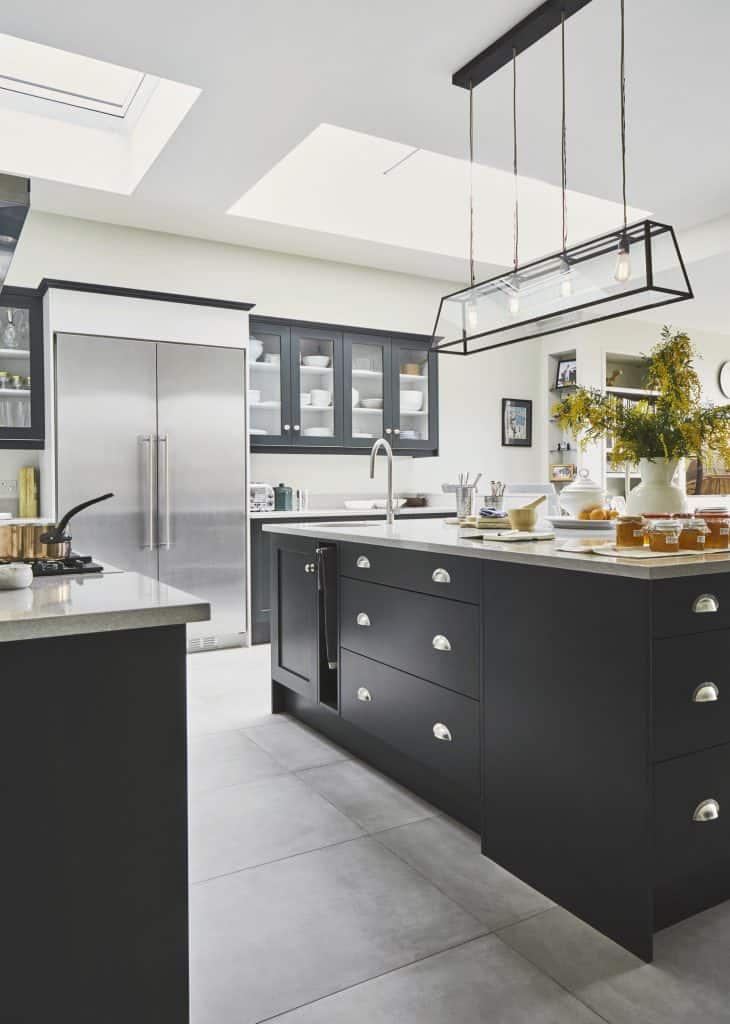 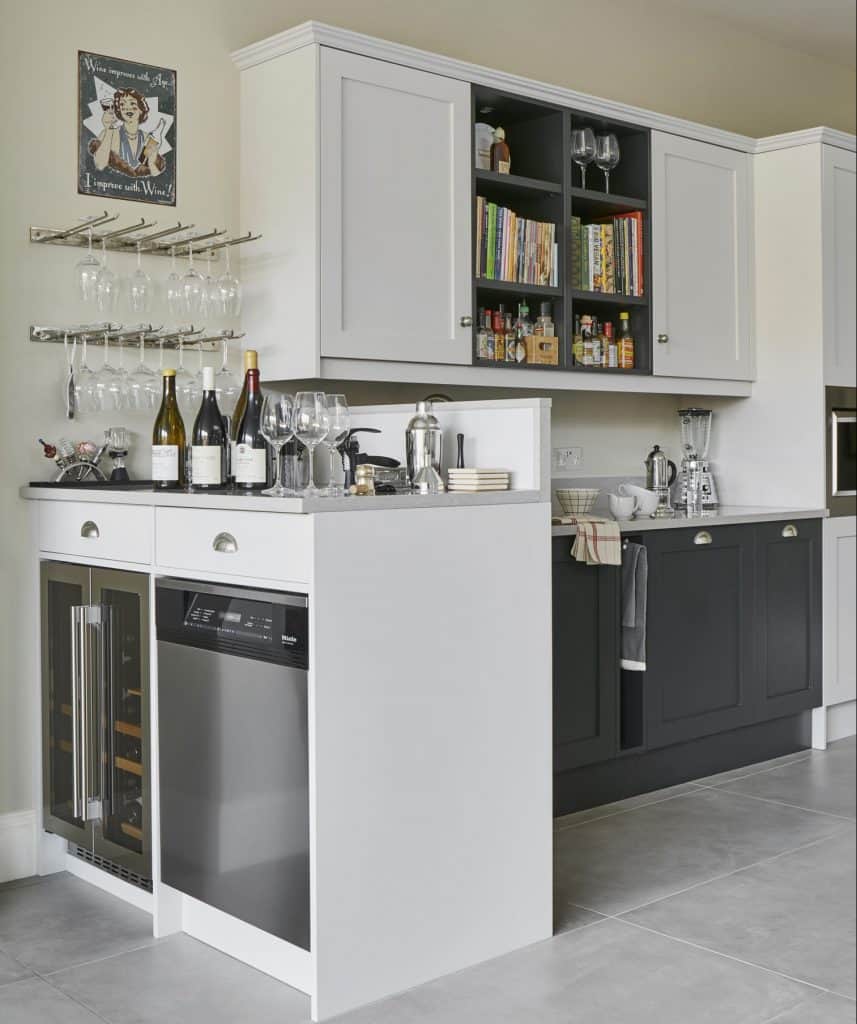 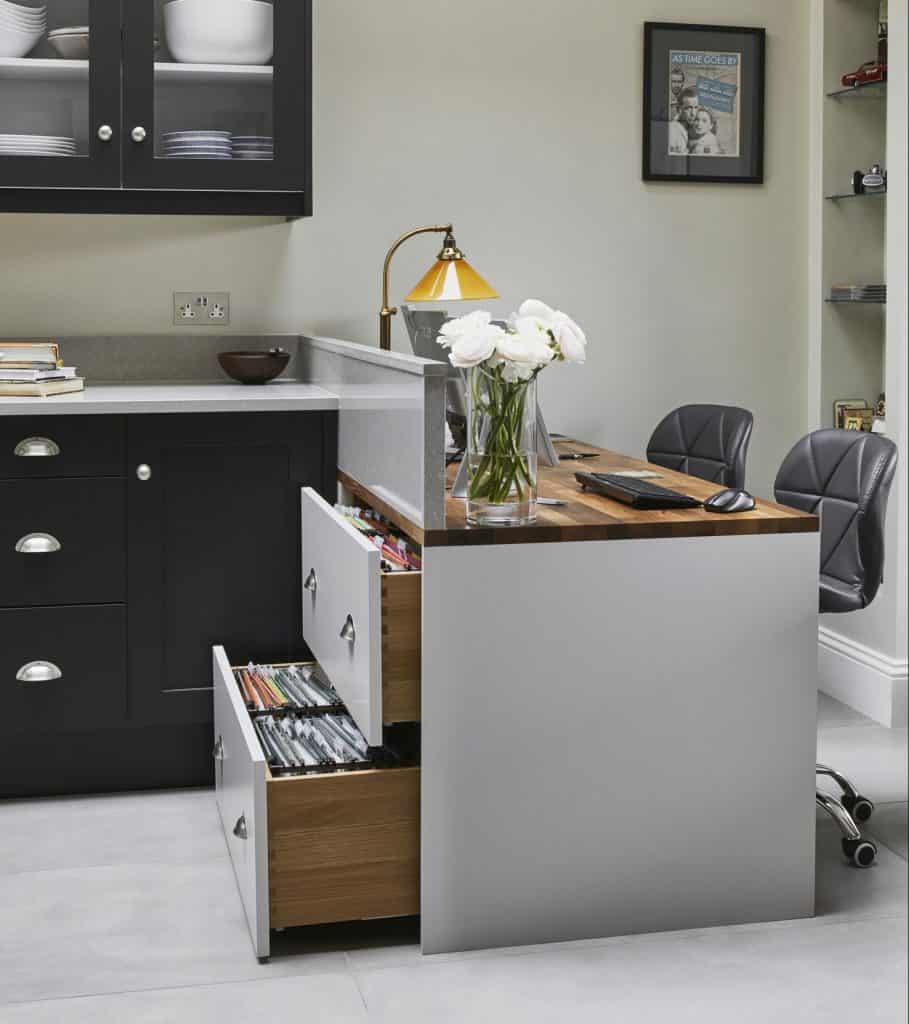 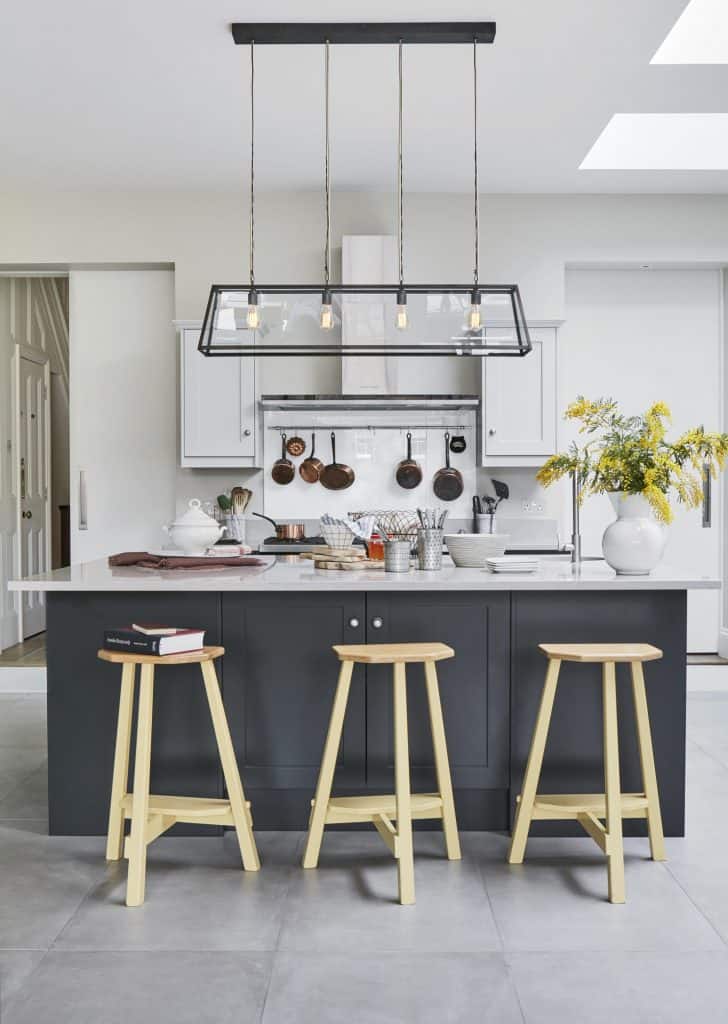 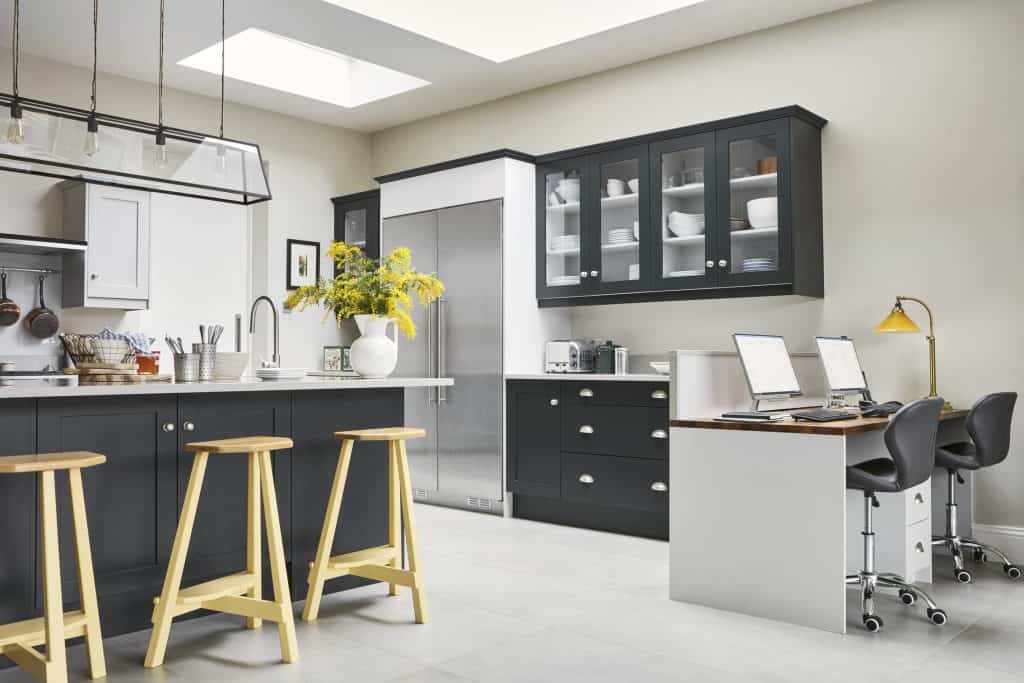 Colours and Range
While the open plan layout is ultra-modern, the house is actually Victorian, so our ‘Shaker’ kitchen range was the natural choice – still sleek and stylish but with lovely details to tie it into the rest of the house.  Getting the right colour was also a big decision for the customers, and in the end they decided on the more neutral ‘Fossil’ for the lighter units and the bolder ‘Easy Graphite’ for the darker units and the kitchen island.  Both are incredibly versatile and complex, changing tone depending on light.  Our customers had some existing furniture that they wanted to put in the space, and the final result has come together beautifully – clean, but super cool.

The Appliances
Our clients went for a mixture here, and found the best appliance to meet their needs in every case.  They had one fridge freezer already that they wanted to integrate into the new design.  For the large range cooker and matching extractor, they chose Fisher & Paykel, which was not what they had originally thought of, but beautifully functional. The glass ware washer featured in the bar is from Miele.

As mentioned above, our clients wanted their kitchen to be open and spacious, a luxury that doesn’t come without compromise in London. Because of this, they decided to integrate their home office into the kitchen space which has worked out really well. By having the office and the bar sections in an L-shape to the wall units, the space is split up into working zones, without losing the airy spaciousness. Our clients knew the exact dimensions they needed for the desk and the drawers, which were not our standard unit size, so our ability to make bespoke furniture was key to the design. While this took some time to work out, in the end they were delighted with our designer’s dedication to their vision, and the skill of our craftsmen in delivering the final product.

Similar to the office, our customers were very sure about what they wanted and needed for this area in the kitchen. As wine traders, a bar for the kitchen was an absolute essential. They wanted a special glass washer and wine cooler, well as worktop space for storage and preparation. What a dream the final result is.

The Kitchen Island and Seating

With oodles of space, the kitchen could fit two full runs, complete with a fridge-freezer on each side; and a large island in the centre. For most of our customers, the larger the kitchen island the better, and this one has enough room for storage on every side, a mixture of large cupboards, drawers and some lovely pull-out wicker baskets. Maximising smart storage is crucial for any space, particularly for those who decide against a separate utility room or larder cupboard. The kitchen island also houses a prep sink – super functional when you’re using the island for its worktop space. The look is completed with a striking crittall lighting feature and our Artisan stools in a sunshiny yellow, to brighten up even the dreariest of mornings. 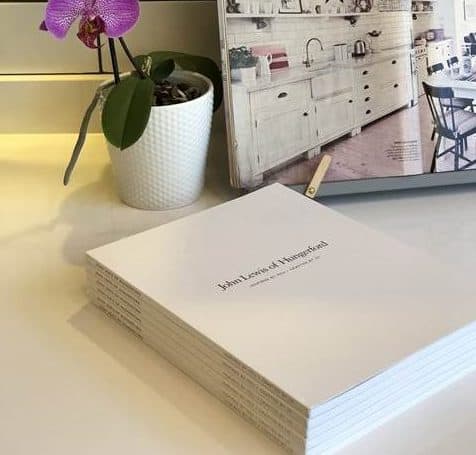 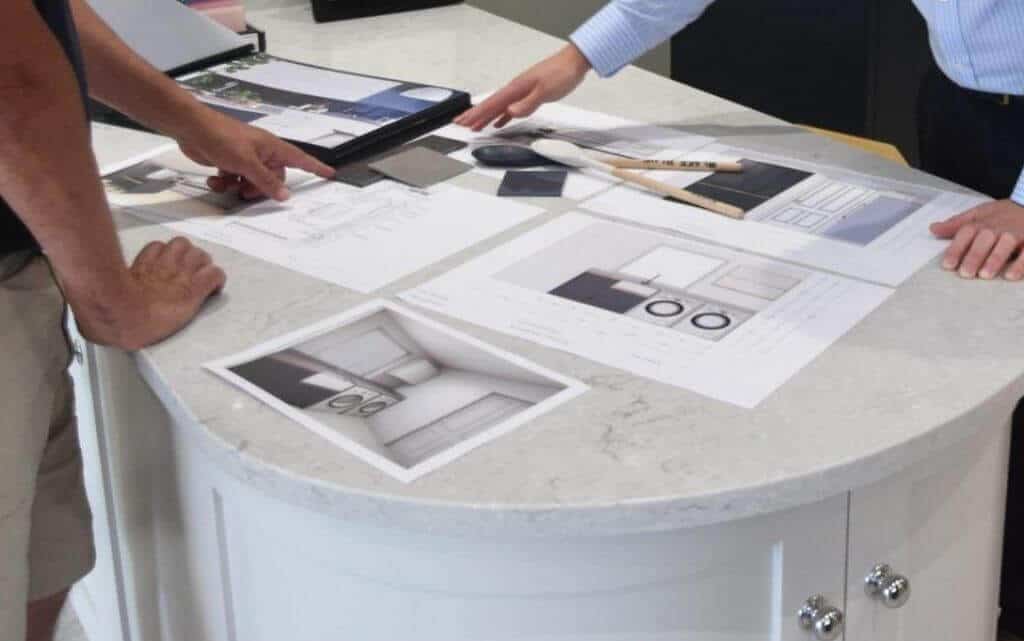 Inspired by you . Crafted by us

Sign up to keep updated with helpful advice and inspiration for planning a new kitchen or bedroom, as well as exciting product news and our latest offers.